Beatitudes of my life

Being grateful for everything in my life…. no matter what…

I’m making the switch to Bloglovin from Google Reader… I hope you’ll consider following me.  It’s easy… just click the link on the side of my blog and you’ll be able to read posts each time I add a message…

Hope to see you here!

I am a self-declared goober when it comes to birthdays. I truly believe that everyone should try and do something special on your birthday…. and that you should have cake. It’s a little thing for me, but I really enjoy celebrating the fact that I’ve been on this earth for another year. I’ve been given a gift of another birthday and, no matter the number, that alone should be worth celebrating.

Imagine my reaction when my colleague, A, wasn’t all that keen on celebrating his birthday. I get that people don’t always want to celebrate if they’re missing family or going through a particularly rough patch in life, but I think that to *not* celebrate a birthday sometimes deprives others of the opportunity to show someone just how special they are, simply because they are. Thankfully, another colleague, C, was on the ball and created the coolest way to celebrate our friend’s birthday…. a SCAVENGER HUNT!

C wrote out a bunch of really clever clues… I wish I was half as creative when it comes to creating such fun, rhyming clues. She took a bunch of photos as she was placing the clues and then I followed along as A followed the clues to their ultimate reward… CANDY!

If you’re trying to come up with a fun, inventive way to cheer up a co-worker or celebrate a birthday with someone who isn’t too excited about celebrating in such a public way, this seems like the perfect fit. Alexander (might as well name him, since it’s in the title of this collage) seemed to enjoy the spectacle of running around with two excited young helpers (seen in a few of the photos) and, I hope, he knows just how glad I am that he let us be “goobers” over his birthday. Besides…. how many chances do you get to “put one over” on a friend… all in the name of celebrating a birthday.

Happy Birthday, Alexander! Thanks for letting us celebrate you! 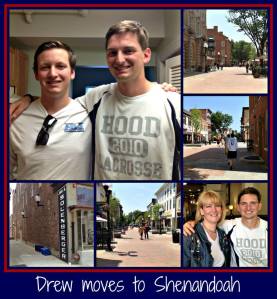 I joked with other parents at his college graduation last year when recounting the months prior to that momentous day.  D had announced, six months before graduation, that he didn’t want to major in Chemistry.  His chemistry professors totally understood when I told them that, to reach my son, they would need to connect things to sports.  This past year, since graduating from college, has found D at home, but rarely ever actually “at” home.   His year “off” centered around coaching swim team, taking 5 prerequisite classes (from Biology to Anatomy/Physiology), lifeguarding, working out, coaching HS and youth lacrosse, playing lacrosse with a local men’s league, and becoming a lacrosse referee… there was very little down time spent at home.  It was a year that was chaotic, busy, challenging, and wonderful… but now he’s gone again and inexplicably, I miss him.

I am learning to offer phone numbers to my son, rather than offering to make calls on his behalf.  I am learning to trust that “he’s got this”, when he’s not choosing to share his school information.  I have great faith in my son and am slowly learning to let go.

I have great faith in D.  He’s grown into such a wonderfully capable young man and I know he’s following the right path for his future.  He knows that we’ll always be here for him, but this is *his* time to go out on his own and create a life for himself.  I only hope that I am equal to the task of letting him create that life without our input.

I bristle at those who tell me to “cut the apron strings”.  A lifetime of helping him navigate through the challenges of growing up cannot be undone simply because he’s 23 years old.   I know that I cannot make his dream come true… nor do I want to do it for him.  I know we probably did him a disservice when he went away to undergrad because we still handled so much *for* him, but in true D-style, he forged his own path, ultimately making peace with situations that still remain beyond my abilities.  He’s one smart cookie.  My son is strong… he is kind… he is responsible… and he is fun.  He’s grown into a young man I both respect and trust.  He has started his new career at a University that offers one of only 13 programs in the country… and he did this all on his own.

My son is following his dream… and I can only offer him my love, respect, and prayers.  He’s going to make an amazing Athletic Trainer someday and I couldn’t be more proud of him.

is paved with the pieces of you.

So, two girls walk onto a plane...

The World of Wine's Got Talent

Follow my endeavors to sweat professionally for 2 years. And teach math.

Beatitudes of my life

Being grateful for everything in my life.... no matter what...

From the Bottom of a Wine Bottle

Missives and musings along the way to the bottom...

FOOD WITH A VIEW

Write what you [are called to] know.

Tasting And A Critic

Finding joy in my Catholic-working-mom life.

A Call To Hands

Lover of cooking ~ Wanting to share my adventures in the kitchen!

Foods for the Soul

I have three passions: wine, cycling, travel, family, and math.

personal musings on life and its challenges

Living a Life Fueled by Healthy Food and Fitness

Ramblings on wine from a German in Ann Arbor

Whine And Cheers For Wine

The Wine Experience and everything that comes along with it.

n. frugality; the quality of being economical with money or food.

Being grateful for everything in my life.... no matter what...

Rantings of an Amateur Chef